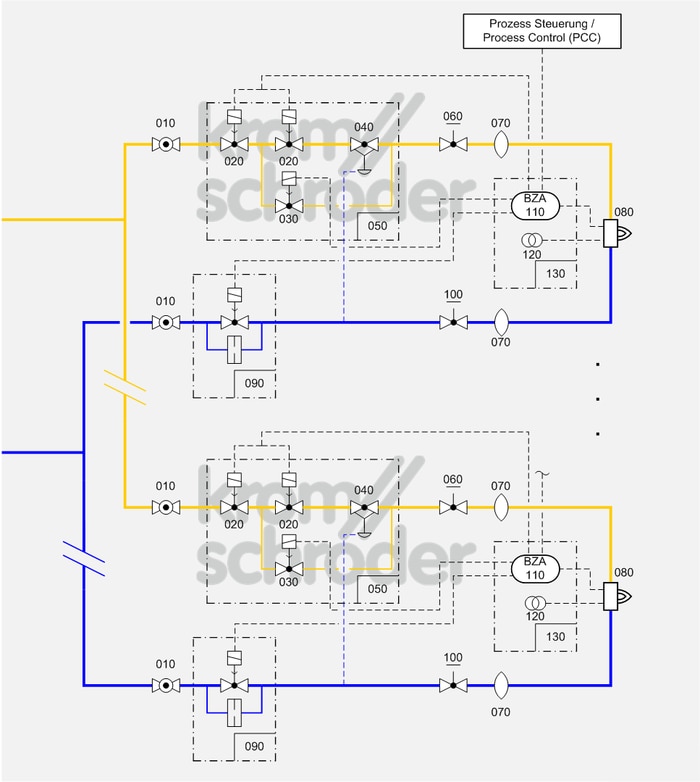 Optimum solution for processes which require a control range of more than 1:10 and/or those which require heavy circulation of the furnace atmosphere to ensure a uniform temperature, e.g. heat treatment furnaces operating at low and medium temperatures in the metallurgical industry…

PILOT GAS RATE/HIGH/OFF burner control is possible without capacity restrictions in accordance with EN 746-2.
This system is suitable for processes in which infiltrated air from the switched off burners does not cause any problems.

With ON/OFF cyclical control, the capacity supplied to the process is controlled by means of a variable ratio of the operating time to the pause time. In this type of control, the burner output pulse frequency always maintains full momentum and maximum convection is obtained in the furnace chamber, even with regulated heating.

The pneumatic ratio control system (040/050) controls the gas pressure on the burner proportionally to the air pressure and thus maintains a constant air/gas ratio. At the same time, it acts as an air deficiency cut-out. Adjusting valves (060) and/or butterfly valves (070) are used for limiting the air and gas flow rates and for adjusting the air/gas ratio.

Ignition and monitoring are ensured by an automatic burner control unit (110/130), which must be approved for continuous operation if the burner is to operate for more than 24 hours, in accordance with EN 746-2. Two valve outputs on the automatic burner control unit for separate activation of the bypass valve and main valve ensure the fail-safe limitation of the start fuel flow rate (pilot gas rate) in accordance with EN 746-2.

The burners are operated in PILOT GAS RATE/HIGH/OFF mode so that this burner system can be used regardless of the burner capacity.

Ignition with up to 33% of the burner rating with a safety time of 3 seconds complies with the requirements of EN 746-2:2010.

Alternatively, a solenoid valve VR..L or solenoid-operated butterfly valve BVHM with MB..L can be used as the air control valve. The air solenoid valve must be equipped with a bypass orifice which is designed for the pilot air flow rate. This air volume also flows into the furnace chamber as infiltrated air when the burner is switched off. For a solenoid-operated butterfly valve, the pilot air volume is adjusted on the actuator.

To switch off the heating, a central automatic shut-off valve should be provided in the gas inlet section.